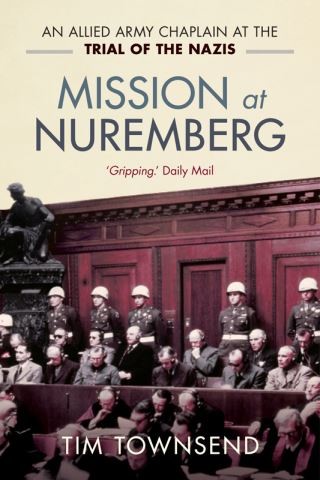 An Allied Army Chaplain and the Trial of the Nazis

Lutheran minister Henry Gerecke was fifty when he enlisted as an army chaplain during the Second World War. At the war’s end, when other soldiers were coming home, Gerecke was recruited for the most difficult engagement of his life: ministering to the twenty-one Nazi leaders awaiting trial at Nuremburg.

Based on scrupulous research and first-hand accounts, including interviews with still-living participants, Mission at Nuremberg takes us inside the Nuremburg Palace of Justice, into the cells of the accused and the courtroom where they faced their crimes. As the drama leading to the court’s final judgments unfolds, Townsend brings to life the developing relationship between Gerecke and Hermann Georing, Albert Speer, Wilhelm Keitel, Joachim von Ribbentrop, and other imprisoned Nazis as they awaited trial.

Tim Townsend: Tim Townsend
Tim Townsend is a senior writer and editor at the Pew Research Center's Religion and Public Life Project in Washington, D.C. He has written for the Wall Street Journal, the New York Times, and Rolling Stone, among other publications. In 2005, 2011, and 2013, he was named Religion Reporter of the Year by America's Religion Newswriters Association.