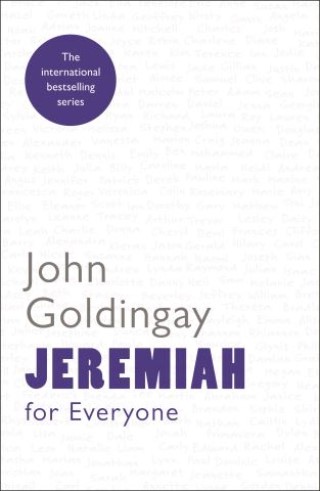 Situated in the years leading up to the overthrow of Judah by the Babylonians, Jeremiah’s prophesies are set against a tense atmosphere of threat and invasion. Strongly warning of God’s judgment and the nation’s imminent catastrophe, Jeremiah lost credibility amongst his contemporaries as the years progressed, but the length of his book and the duration of his ministry establishes him as a major figure in the Old Testament. The fulfilment of his prophecies in later events of the Bible reassert the truth of his words and his speeches and prayers depict a God whose anger is a passionate response to the depths of love he feels for his people.

Using personal anecdote, a witty and lively style, and drawing on his considerable theological knowledge, John Goldingay takes us deep into the unfolding story of the Old Testament.

John Goldingay: John Goldingay is Professor of Old Testament in the School of Theology at the Fuller Theological Seminary in the USA. Prior to joining Fuller, he was principal and a professor of Old Testament and Hebrew at St John's Theological College, Nottingham. His published titles include Old Testament Theology (two volumes published, with more to come) and commentaries on Daniel, Isaiah, and Psalms. As well as being a member of the Society of Biblical Literature, he serves on the editorial board for the Library of Hebrew Bible/Old Testament Studies.